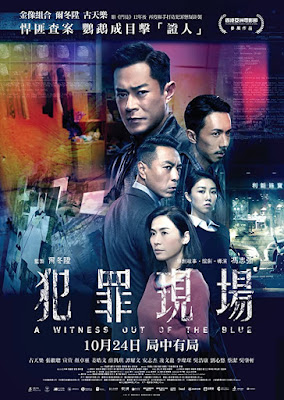 When a member of a gang of robbers is killed, suspicion falls on the rest of the bad guys. Things become complicated when a slightly clumsy officer is assigned the case, the only witness to the crime is found to be a parrot and the other gang members start dropping.

This is a solid if breezy police procedural cum action film that may not be high art, but it is entertaining. I say that because going into the film I was coming from a place where a couple of friends had told me that they were hoping for a bit more from the film. I didn’t have the highest of hopes… and then I sat down and fell into the film. I paused the film a couple minutes in to put my notebook aside and to get some popcorn and soda so I could just kick back and enjoy. Say what you will some times you have to stop being a “critic” and just revert to being a film fan.

To be honest I had a blast watching A WITNESS OUT OF THE BLUE. No it isn’t perfect. Yes you can figure bits of it out, but you really won’t care because the film moves at a good enough clip that you just get pulled along. As I said above it isn’t high art but it is a lot of fun. It’s so good in fact that when it comes out in the US I’m going to consider getting myself a copy so I can see it again.

Worth a look when it plays Fantasia. (Go here for information)
Posted by Steve Kopian at August 19, 2020