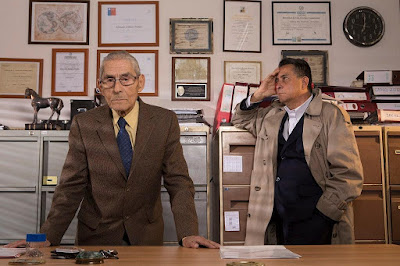 Nominally set up as a thriller this is the story of Sergio who is hired by a detective to go undercover at a Catholic nursing home It seems a client thinks her mother is being abused. Sergio is hired to be a man on the inside. Despite not being as tech savvy as he said he was, and despite turning in reports that are more introspective than informative Sergio plods along becoming entwined with the residents he has been hired to watch.

Once you realize that this is not going to be your typical “spy” or “detective” film, there is no tension or grand revelations, only good people, MOLE AGENT opens up to become a charming film that will make you smile. The film is just good times with good people who are just going through their paces. It’s in its way a lovely celebration of life that reveals wonderful shading in unexpected ways.

I was at first confused by the film, it seemed more narrative than documentary. Then when I realized that there wasn’t going to be mysterious people I fell into it and ended up smiling from start to finish.