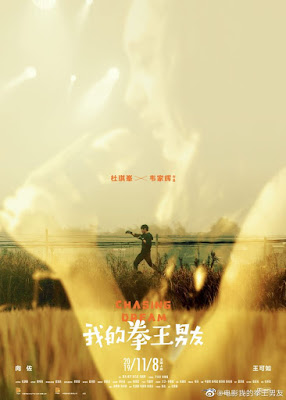 I am a huge fan of Johnnie To. He makes films that challenge you. A lot of times in a good way, and some times in a bad way. Even when he goes so far off the rails that he’s launched into space you can’t look away or flee the theater because you have to see not only if he pulls it out but where he is taking things.

CHASING DREAM is one of the off the rails affairs. Don’t get me wrong it is entertaining as all hell but it is still out there- way past the third star to the right and straight on to next Tuesday.

The plot has something to do with a boxer and a would be singer who end up drifting toward a romance while he chases an MMA championship, she tries to become an singer and some questionable types try to make money on their backs.

Mixing MMA fights and musical numbers (sorry not at the same time) Johnnie To has made a film that has more moxie than the vast majority I’ve seen in a long time. As I said above I love that Johnnie To’s films force you to stay with them because you HAVE to see how it comes out. I mean I’m glad I stayed to the end to see To lift and riff on one of the most iconic moments in movie history. It made me laugh partly because it made sense in the context of went before but also because I was in disbelief that he actually ended the film as he does.

Despite the film being out there at times I honestly can say that the one thing that bothered me with the film is the use of wires in some of the MMA fights. Yea it looks cool, but it doesn’t look real.

Now streaming at Fantasia CHASIN DREAM is one of Johnnie To’s WTF films. If you can go with a bright shiny all over the place film that just goes with it I highly recommend it. If you need something that makes sense and is normal (if you are what the hell are you doing at Fantasia?) then stay away.
Posted by Steve Kopian at August 22, 2020