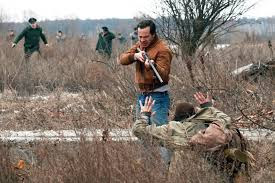 Just after the reunification of Germany a cop from the former East Germany  is sent with a former West German cop to a remote village where two sisters have gone missing.

Basing his screenplay on the Spanish film MARSHLAND Christian Alvart has kept  the mystery and the pot boiling tale of a small town with secrets buried everywhere and spiced it up with references to the politics of reunification. Its an interesting take that nicely shades things just enough that it doesn't feel completely like we've been here before.

If there is any problems with the film its that Alvart seems to be trying to do a bit too much. There were a couple of times when I thought that some of the politics was going to play into the main story but it never really happened. While it isn't remotely fatal, it did make me wonder why the threads are there.

On the other hand I am over thinking things since this is a gripping mystery that anyone who loves really good puzzles will love.