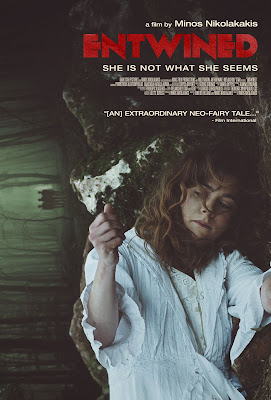 A doctor needing a change travels to a remote village where he meets Danae a young woman with an off skin disease. As he tries to make in roads with the villagers who are wary of strangers he falls for Danae...

Modern day fairy tale/ myth is gorgeous to look at but maybe just on the wrong side of arty to truly work a a feature. Despite having some chilling moments this is a tale that would have worked better as a long short. I say this knowing that I really can't explain why lest I reveal the entire plot which would defeat the need for you to see it.

ENTWINED is in virtual theaters August 28 with a North American VOD release on September 8
Posted by Steve Kopian at August 25, 2020