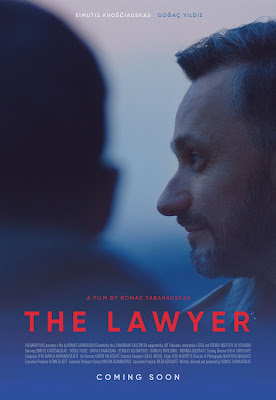 Gay Lithuanian lawyer Marius drifts from relationship to relationship. Not long after his father dies he meets Syrian refugee Ali who works as a sex-cam worker. There is a connection but there are complications.

This is a good little drama/romance  the complications of  being LGBT refugee. More importantly it is just a solid romance that manages show the complications that exist in real world messy relationships and not the typical happily ever after Hollywood arc.

One word of warning, despite being a Lithuanian film, most of the film is in English. While that made it easier  to watch than reading subtitles I think it also resulted in some uneven line readings. The poblem is not leads Eimutis Kvoščiauskas and Dogaç Yildiz who are both excellent, but from some of the others are better than others. It created a sense of unreality for me since I know that outside of this being a movie not everyone would be speaking English all the time.

Quibble aside THE LAWYER is a good little film and worth your time.

The film is out on DVD on August 18 via TLA Releasing. It debuts exclusively on SVOD on the Dekkoo streaming platform on Aug. 20, but it will roll out on major TVOD platforms in the Fall. On Aug. 24, it will screen in a theater for the general public for the first time at the 49th edition of the Molodist Kyiv International Film Festival in Ukraine
Posted by Steve Kopian at August 15, 2020