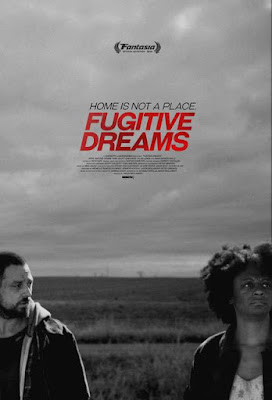 I am uncertain about how to discuss FUGITIVE DREAMS. There is a bump in connection with the film that I kind of want to talk about but in order to do so it may sound like I don’t like the film, which I do. Perhaps it would be best to proceed as follows.

FUGITIVE DREAMS is the tale of two homeless people as they travel across a version of the United States. Along the way we are forced to ponder homelessness, race, mental illness and addiction. It is a well-made and well-acted tale that is worth seeing for anyone who is wanting to see an off the beaten trail film that will make you engage with its tale and characters.

The  “problem” with the film is that for all it’s opening up, it’s shots of fields and trains in transit, the film never shakes off the fact that this is based on Caridad Svich’s play Fugitive Pieces. This is a film full of dialog and monologues of the sort that you only see on stage. It’s not bad, actually much of the dialog is dynamite, the problem is that no one in real life speaks like that. I understand that the film is supposed be allegorical, but it takes a bit of the edge off things. Truthfully it’s great stuff and it will play that way on stage, but on the big screen, in the approximation of real life if feels slightly off.

Regardless I really liked FUGITIVE DREAMS and recommend it.
Posted by Steve Kopian at August 31, 2020