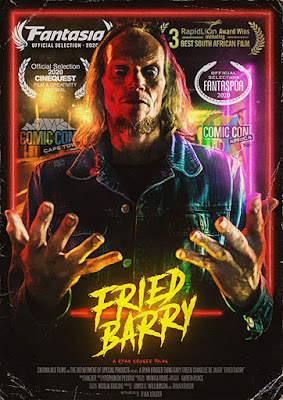 A son of a bitch is abducted by aliens, one of whom takes him over and then wanders the city indulging in sex, drugs and rock and roll.

One of a kind film is full of graphic sex, violence and, strangely, humanity. As dark and uncomfortable as this film can be. it is also strangely is moving. There is an emotional journey that kind of transcends just the darkness as "Barry" goes from pure expressions of pleasure to something more. What he does affects people and they affect him.

Watching the film I found I was kind of caught off guard. At first I thought it was going to be a down and dirty film but then things began to change. Alien Barry started to not just be a heathen and the humanity began to creep in. The film's seeming bleak outlook seemed to lighten up. I was shocked and I was moved in a good way. I was so impressed that when the film was done I seriously considered starting it all over again and seeing it through the eyes of someone who was aware of what the film was doing. Unfortunately It was too late at night for that but I intend to do just that as soon as the film gets a regular release.(And it will get a regular release because this film is simply too good not to_

While decidedly not for all audiences, for those who like a humorous adult film that will challenge them on many different levels I recommend FRIED BARRY.
Posted by Steve Kopian at August 21, 2020