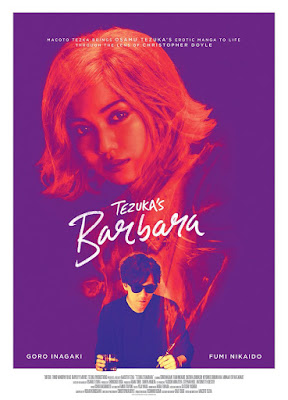 Yosuke Mikura is a novelist with everything it seems. He has rich friends hobnobs with the powerful and has met with great success. But there is a problem he isn't writing up to his old standards and can feel it slipping away.  Things change when he meets the seemingly homeless drunk Barbara. She sparks his creativity as he heads off in a new obsessive direction.

Driven by an excellent jazz score Makoto Tezuka's adaption of his father's 1974 adult manga is film were reality and unreality(or is it?) blur and blend. Very mannered in its construction, everything in every shot seems to be a clue to something (thank you Christopher Doyle). At the same time you can feel Tezuka's hand manipulating the actors.  The result is not so much a work of the heart but of the intellect with a result the film is something I admired much more than I liked.

To be honest while I am a fan of Osamu Tezuka's body of work, I never much cared for his sex infused stories such as BARBARA. It was not that they were bad, but more that of all his stories they seemed to be one one's that he was most clearly writing. I could feel him at his drawing board writing the story where everything else just seemed to be this great stories that simply existed.

Worth a look for the jazz score and because it's a good film, even if you are held at arms length
Posted by Steve Kopian at August 26, 2020