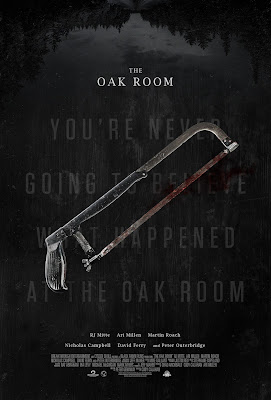 A drifter returns to an old bar at closing to settle up with the owner and collect somethings. But things spin off into dark tales that play similarly to the events transpiring. Stories feed on stories as the evening careens to a dark conclusion

I think how much you like this film is going to depend upon how you take RJ Mitte as Steve, the drifter who returns after several years away. Mitte's performance as the a failure young man is a kind of make or break since he spins Steve into someone who gets on your nerves. He's the sort of a guy who you kind of pity for a bit before you realize he's a jerk and you end up tossing him in the street. I never really liked him and I personally would have tossed his ass out regardless of whether I had his father's ashes or not. I really couldn't believe him enough to buy what he was saying or like him enough to car. While I don't think there is anything wrong with the role as written I just think Mitte was the wrong guy to try and pull it off.

Outside of Mitte's performance OAK ROOM is a pretty good thriller. I've always liked stories that involved well told stories and the film certainly has that in spades. Actually watching the film I had a sense that this would make a killer stage play. With the right lighting and a few changes of background props this tale of bars and the crimes that happen in them would be a something special when it was happening right in front of you.

I liked the Oak Room, more so when one of the leads wasn't on screen. Regardless it's worth a look at  Fantasia.
Posted by Steve Kopian at August 26, 2020