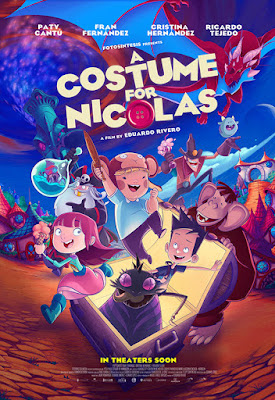 A COSTUME FOR NICHOLAS is a charmer. A beautiful little film it carves out it’s own glorious little place in your heart and is certain to be one that you want to share with everyone.

The story has young Nicholas going to live with his grandparents after the passing of his mom. He doesn’t understand what that means but he is happy because he is with his grandparents and his cousin who has been dumped there by his absent father. Nicholas is a cheerful kid with Downs Syndrome. He is buoyed by the stories his mother told him about the six heroes who set out to stop a war and make the world a beautiful place. His mother also made him a new costume each year for his birthday so he can be each of the heroes. As Nicholas adjusts to the new circumstance he is periodically sucked into his trunk where the costumes rest. Eventually he begins to bond with his cousin who also gets pulled along in a Nicholas’ grand adventures.

Whatever you think this film is going to be forget it, it is something more special. In reading on the film I saw it compared to Pixar, Studio Ghibli and The Lion The Witch and The Wardrobe, and while there are hints of that director Eduardo Rivero and the team at Fotosintesis Media have actually made something gloriously their own. It may have moments that hint at those other things but the truth is A Costume For Nicholas is its own joyous film. While the film does have some darkness in it owing to the themes of accepting loss and moving on, this is really a film that makes you feel good. I smiled pretty much from start to finish.

You will forgive me if I don’t go into the discussion of Nicholas and Downs Syndrome. Yes it is important that we are getting a character with a learning disability, but at the same time the if I talk about it too much it may turn people off. The point of the film is not the disability, but it is about life. I think the way everyone treats Nicholas as just a regular kid will do more for acceptance then pointing out the difference so I’m just going to let it go.

And now the important question Where did this film come from and when can we have more? I know that Fotosintesis Media has only turned out one other film which I haven’t seen, however if it is as strong as this it has to go on my must see. More importantly if they can continue turning out films as wonderful as this they are going to become a powerhouse studio. Trust me if they can repeat this we are not going to be comparing them to Pixar and Ghibli as if those studios are the bar to match, they will be the bar.

I loved this film a great deal. A must see at Fantasia or where ever it plays. (Oscar please take notice)

For information on the film go here.
Posted by Steve Kopian at August 20, 2020