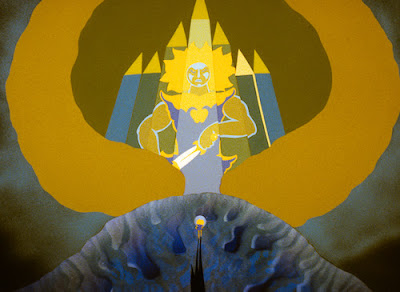 I honestly don't know what I think of the plot of THE SON OF THE WHITE MARE. While I have a vague idea about what happens, I wasn't paying full attention to the story. What I was focused on was the magnificent and hypnotic visuals. The images are true works of moving art. I don not know what drugs the director was on but I want some.

The reason to see this film, preferably in the dark and on a big screen is sound and image. What goes in your ears and eyes will rock you on the most gut level. It is like being trapped in a dream of someone else's doing. It smashes you pillar to post but you really don't care because its being done in the best sort of way. When the film was done I was exhausted and I wanted to go again right then.

While I have seen things that have tried to do something like this on a small scale I have never seen nor experienced a film quite like this. For me it is one of those films that changes what I think film could be be.

A masterpiece of cinema and of art.