NYAFF Capsules: ROM and GONE WITH THE LIGHT

I received access to the NYAFF library of films just as the festival was starting so I am wildly behind. In order to speed things up some of the reviews are going to be a bit shorter than the normal NYAFF reviews. 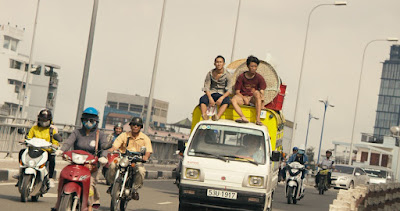 ROM
In Vietnam a homeless orphan who can see lucky numbers  acts a lottery runner for people. If his pick comes in  he gets a few dollars payment. kid sees lucky numbers. A show don occurs when a new kid muscles into his territory.

Good film is more of interest for the fact this is taking place in Vietnam, a place we haven't really seen in films before, than the story. The story, which the promotional material compares to SLUMDOG MILLIONAIRE is also similar to other stories we've seen over the years. On the other hand the images of Ho Chi Minh city are bursting with life, and most of the secondary characters are wonderfully unlike anything we've seen in most Western films.  I want to see the film again for the people and the scenery more than the story. 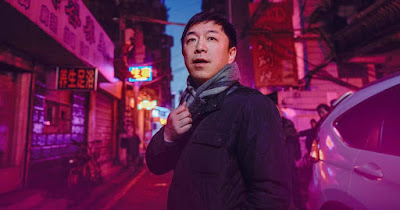 The plot of the film has people across the globe disappearing in a flash of light. No one knows why they are gone but speculation is rampant with some feeling that those who left were loved more than others or were in love.  The speculation as to why begins to make people crazy.

Needing a much longer review than I am capable of turning out right now GONE WITH THE LIGHT is a magnificent piece that manages to be a film that makes you think and feel and carry it with you past the ending. The great cast, headed by Huang Bo, who gives an Oscar worthy performance, manages to blend all everything together so that we don't think about what type of film we are seeing and we only concentrate on the human drama happening before us.

This is one you need to experience.
Posted by Steve Kopian at August 30, 2020