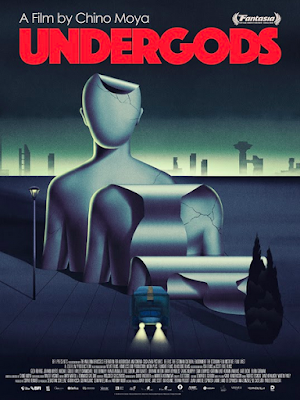 I honestly don't know what I think of UNDERGODS. I've seen it twice and I still have no idea what I really feel about it. I suspect that I think it's okay but not much more.

The film begins with two guys driving around a dystopian city collecting bodies and telling stories. We then follow the lives of three people they cross paths with. Their tales involve people intruding into the lives of others (An unhappy couple have tenant in their building intrude into their lives after being locked out of his home, a business man has his daughter kidnapped by a man he screwed over and a man returns home from prison to find he is an outsider in his family)

I love the opening minutes of the two drivers driving around collecting bodies. The trouble is I honestly don't know what I think about the stories themselves. They are bleak self important tales of an alternate modern life and they all strive to be about something important. All the characters, out side of the drivers, seemed to be variations on each other.  The stories felt empty and forced to a conclusion. Both times I watched the film my interest really began to wane about 20 minutes in. I stopped caring and some where before the end of the second go through I simply stopped watching.

While the rundown Eastern European city where the film was shot looked suitably decayed, it sadly, was the only thing keeping me watching.