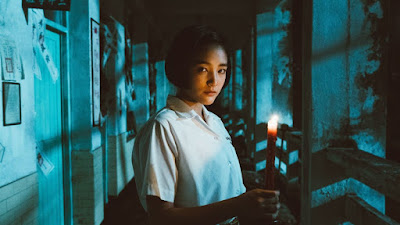 Taiwan in 1962, during the time of the White Terror in Taiwan, a time of martial law a secret literary group gathers in a school to discuss banned books. When the teacher running the group disappears things go sideways with young Wei waking up at her desk to find the school over run with dark forces.

Historical drama collides with a coming of age tale in a monster filled supernatural world in an ever shifting film that gets under your skin. While never bone chillingly terrifying, there are too many threads that prevent the film from sliding over in to pure horror, the film is the sort of tale that hangs with you long after you see it. It’s actually so good that it isn’t surprising that the film has won a boat load of awards.

Interestingly the film is based on a video game. I can’t imagine what that would be like since the film always seems to be narrative based and never drifts into sequences where you would think it’s mimicking game play.