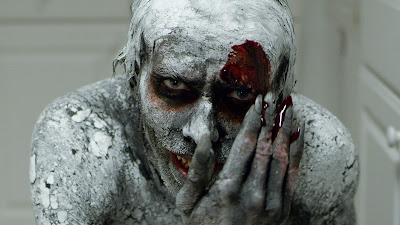 Less feature film than a shorts collection A Night of Horror : Nightmare Radio is a film that on it’s face is Tales From The Crypt anthology film but in reality is just a collection of  10 short films linked together by a radio DJ “reading” horror tales on the air. The result is a very mixed bag.

To be honest I’m not sure what I think of this collection. I’m mixed on it, only in that I went in expecting a new horror film and I wasn’t really expecting to end up seeing a mix of shorts, some of which I had seen previously. While none of the films are bad the quality is all over the place, and none of them really stuck with me enough to right on them.

I think the reason I’m kind of torn about the film is that normally when you see a film like this you expect there to be some sort of connection, all the stories were from EC comics or by one author or something that ties into the wrap around story. Here everything is scattershot. If it was just a random collection of horror shorts I would have been okay but the packaging made it seem like it was going to be more than it was.