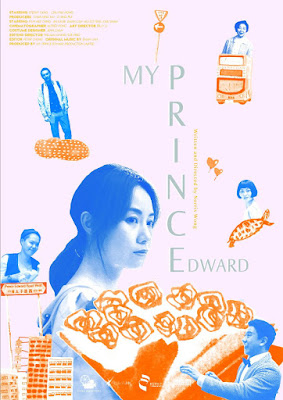 Fong lives with her boyfriend over the Prince Edward Mall in Hing Kong where all the wedding shops are located. She is more or less happy. One day her boyfriend, also named Edward, proposes...but there are complications. Fong is secretly married to a man from the Mainland. Also she's not sure if she needs to be married...

MY PRINCE EDWARD surprised me. I didn't expect such a wonderful film. I know that sounds terrible but some of the promotional material I had seen prior to it being sent my way made me think this was going to be typical romantic drama. It is not really typical and transcends the normal to be ly a wonderfully real and moving film that explores our mating habits and what we need.

Norris Wong's film is a joy.  Ms Wong has made a film that makes us smile, and think and feel.

What makes this film work is the cast. The cast just disappears into their roles. This is especially true of Stephy Tang as Fong, who just hits it out of the park. Its an all in performance where she grabs our attention from the first frame and hold it to the last. This is one of those star making for the ages performances where the actor is so invested in the role that we even see it in their eyes. Tang's performance is so good that she not only is giving us information with her body language and vocal inflection, but time and time again we can see Tang's mind working. There is more going on. We can see her thinking and not just reacting. It's so good I did something you aren't supposed to do when you watch a film for review and that is I backed up the screener  to watch a moment or two again.

One of the things that I love about the film is that it doesn't feel like any other Hong Kong romance or drama.  Most similar Hong Kong films I've run across tended to have something about them that makes me never forget that what I am seeing is a  film.  With MY PRICE EDWARD I just fell into the film. I know exactly what happened, the first time Fong goes into the bridal shop, I suddenly had this sense of place. I felt I was there. I never really was but I was in similar places in Manhattan and as a result it connected up in my brain and suddenly I could feel and smell and taste everything about the film.

I'm not going to really talk about where the plot goes. Partly I'm doing it because I don't want to ruin things before most of you get a chance to see it I'm also holding off because I really want to see the film a couple more times. Partly because  I just want to see it again, but also I need to really see the film knowing its rhythms and twists and turns. This is a great film and I want to do it justice.

Do yourself a favor and just see MY PRINCE EDWARD when it plays a festival or engagement near you.