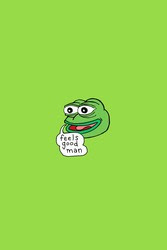 This is a film about the creator of Pepe the Frog, Matt Furie, which was stolen by a the Alt-right to be used as a meme. He was first seen in a comic called Boy's Club, about slacker friends hanging out. Pepe is the least likely character to be considered by the far right which is kind of puzzling. Furie was at first amused by the popularity of the character but became troubled as it was used by those farther and farther to the right of center politically.

Interesting premise of an artist attempting to reclaim his work will either work for you or bore you depending upon how you take Furie and his comic. While I am super interested in what happened and what Furie did to fight back, my interest waned because I neither care for the comic much nor do I think Furie is all that interesting a person. Yes I know this is his story but I kind of wish there was more talking heads telling the story. Yes I completely understand  that is my own problem, but at the same time it made this a tough slog for me and had me frequently wondering what this needed to be 95 minutes when a third of the run time would have worked for me.

One of the misses of this year's Fantasia is something where your mileage may vary
Posted by Steve Kopian at August 22, 2020