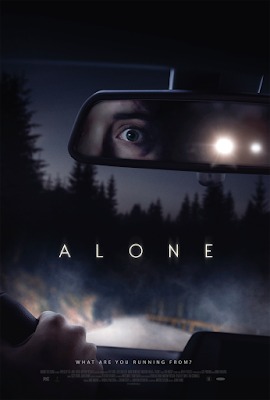 ALONE is the story of a woman named Jessica who packs up her belongings heads off to a new life. Along the way she meets a creepy guy who keeps showing up in in front of her. Eventually he kidnaps her and she has to fight for survival.

I’m not going to lie. For about 80 minutes ALONE is a well-acted, and well-made thriller that covers extremely familiar territory. We have been there any number of times to the point that you can pretty much write what is going to happen way in advance. While it’s not fatal, especially since the film has a first rate cast that holds our attention when the familiarity of the plot makes it seem like we could wander off to the bathroom without missing something…

…and then things shift around and in the final fifteen minutes or so. At that point the film kicks things up a notch or two. As we drift toward the final confrontation the film blossoms. There are a couple of turns that are wonderfully unexpected. Things happen and you wonder why no one did that before. Additionally there is finally a real weight to the battle. Perhaps it’s knowing that the finale is coming and that you know things have to conclude. Or perhaps it is because the final battle is shot with an intensity lacking in the rest of the film , but for what ever reason the ending of this film is so good it makes an otherwise okay film truly great.

Truthfully it is so good you need to see the film.

I also have to give the film points for doing something that many similar films don’t normally do and that is giving us a heroine who is a rounded person. Too many of these films treat the women as pieces of meat to be abused. The film HUNTED which is also playing Fantasia is so misogynistic that it is offensive. The woman at the center of that film and others doesn’t exist for any reason other than to be abused. You know this because there is nothing to the character other than the abuse in the film. In ALONE Jessica is so well drawn she is real and we care what happens to her. And because we care it makes the cellphone call a kind of grand fuck you moment to every filmmaker who has ever put a woman in peril. In the one simple act od stating her name she kicks down the door, destroys the genre and gives notice that characters really can’t be meat any more. It’s a wow moment that should change the way we view the movies, and these sort of movies in particular. As a result the film becomes something greater- and it also gives the finale a resonance that makes the film cathartic and a must see.
Posted by Steve Kopian at August 27, 2020