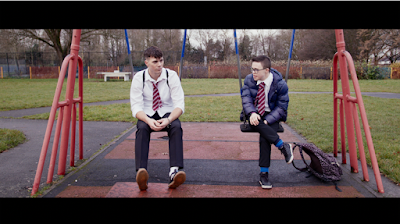 The official synopsis is "Two teenage boys from opposite side of the tracks meet at the swings each week to escape their dysfunctional homes." the reality is something much better and much more moving. It is a grand tale of friendship and acceptance.

I don't have a great deal to say about S.A.M. other than it is truly a great little film. There is a genuine humanity to the film that I have rarely seen in any other film. The bond between the young men is absolutely staggering and perfectly realized. The lead performances by George Webster and Sam Retford are monstrously good to the point I don't know if I will see better ones in the next few years (Yes they are that good). In all seriousness whether the film interests you or not you must see this film just for the performances which pretty much put everyone in Hollywood to shame. Their performances are ones for the ages and ones that should be studied as the right way to act.

And while the performance shine, the whole film is marvelous. Trust me this film is an absolute stunner. You need to see it