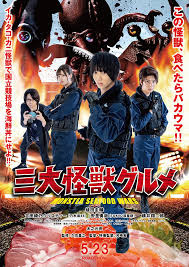 The worst thing about Monster Seafood Wars screening at Fantasia’s virtual festival is that it will not be possible to watch the insanity with a theater full of like minded festival goers. As much fun as the film is on it’s own terms, this film would be so much better if you were to see it as a communal experience. In all honesty if you screen it, figure out a way to watch it safely with some friends because it will improve the experience.

Told in flashback the film tells the story of events a year earlier when an offering of sushi, an octopus, a squid and a crab hijacked by an unnamed person and mutated into giant monsters which storm the city.

A spoofy send up of Kaiju films and TV shows the film pretty much hits every note perfectly. Its so perfect that short of some of the tongue in cheek humor being obvious this could almost be considered a straight film. I chuckled my way through the film from start to finish. Basically I had a blast.

If you love giant monster films or TV shows like Ultraman or the more wacky side of Japanese media then this film is for you
Posted by Steve Kopian at August 18, 2020