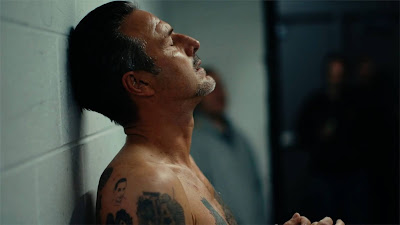 Portrait of actor David Arquette who in 2000 won the WCW Heavyweight Championship belt in connection with the film READY TO RUMBLE and potentially wrecked his career since so many people were offended by it and it kind of typecast him as a goofball. The trouble is Arquette genuinely loves wrestling and call of the ring haunted him. Almost two decades later he tries to get back into the ring as a real wrestler.

To be honest I'm not sure what I think of the film.  It's not a good or bad thing, I think it's a good film that could probably use a little trimming, it is more that at times it feels like the film is a kind of mockumentary. Forgive me I don't follow wrestling so I don't know how serious Arquette is, but there is this sense at times that at least some of this is a less than straight forward.... which makes it kind of like wrestling.

Regardless of my doubts this is a good little film. It may not rattle the pillars of heaven but it entertains. Probably even more if you are a fan of wrestling.