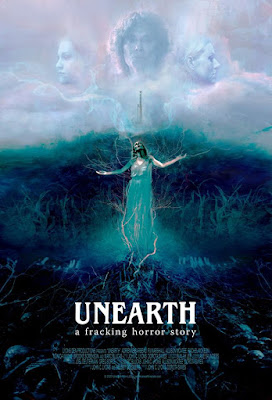 A farm family struggling to pay the bills turns to a local energy company and fracking to make ends meet. They do this despite being warned by a neighbor that they are making a deal with the devil. Once the deal is struck something is unleashed and everything begins to change.

Just miss film looks good, has a great cast but is way too intent on making a point about struggling farmers, the evils of big business and the dangers of fracking to ever generate thrills. To me, the film  seemed to be more interested in the human drama than the horror. I would have been fine with that had I walked into a drama and not a horror film.

Then again I might have liked this more had the horror been a little bit more up front. Things are in the corn fields, the distance or  shot in such a way as to be largely fleetingly glimpsed. I never got a sense of anything other than being a small farmer in financial trouble, even if the ending has some chills.

Wile not really bad there is nothing here to make it more than a noble miss.
Posted by Steve Kopian at August 26, 2020