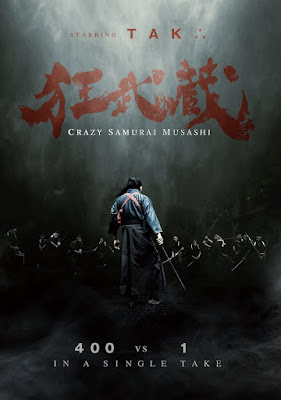 CRAZY SAMURAI MUSASHI is a curates egg of a film. The film is a recounting of the legendary battle of master samurai Musashi against 400 samurai (well the poster says 400 and Fantasia's website says 588). The literal centerpiece of the film is a 77 minute single take sword fight as Tak Sakaguchi as Musashi takes on all of the other samurai. There is no real plot, there is just the brief events leading up the fight, the fight and the brief events after.

How you react to an unending sword fight against impossible odds will determine how you react to the film. I was intrigued with the film for a while but at a certain point my interest began to wane. I still wanted to see how it played out but I didn’t give the film 100% of my attention. I checked my phone. Don’t get me wrong the battle is interesting, especially at the start and end of the fight, but there is a bit in the middle where I slightly disconnected it was too much.

That said don’t let that sway you from seeing the film. The fight is truly engaging and the technical achievement is to be applauded, but more importantly it should be seen. To be certain it isn’t deep, but at the same time it is a masterful reduction of a sword battle to its most primal elements.

I should point out two “technical flaws”, because if I suspect someone is going to email to ask why I didn’t.

When you see the film be aware that the film is largely bloodless. Samurai are it and go down without sprays of blood. It is something that had to be because the whole fight is in one take and there is no way to rig almost 600 men with blood and gore.

The other point I need to make is that you will, repeatedly see the shadow of the camera and the cameraman. Ignore it. That’s not the point- the martial arts ballet is the point and you simply have to go with it because there was no way to hide it and too expensive to remove digitally.

CRAZY SAMURAI MUSASHI  is a solid film and an achievement you should witness when it plays Fantasia
Posted by Steve Kopian at August 16, 2020