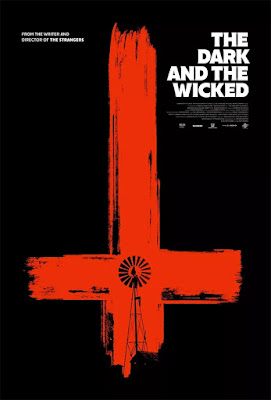 THE DARK AND THE WICKED is a creepy little horror machine that is full of tension and unease. The story of a brother and sister who go home to say good bye to their dad and help their mom is scary . We are moments into the film when we the dark presence haunting the farm among the goats and it just gets darker from there. It has a twisted dream logic and some deeply disturbing scenes. It is, taken purely on face value a scary little film that is worth your time and money.

As much as I really like THE DARK AND THE WICKED it is film you can not think about. A finely tuned a machine as it is, the plot makes zero sense and in one of the lulls I realized that the film was simply set up to scare you (which it does) but it’s really dopey.

Don’t get me wrong everything from the images to the sound design is geared to make you feel scared. This is great but the scares are uneven. Say what you will director Bryan Bertino knows how to make you feel ill at ease but almost every one of the scares involves a jump scare. I should add that it’s a jump scare that is telegraphed. Not once did I not know the jump was coming. I jumped but it wasn’t as big as it should have been. I think the only genuine scare came when a dead character is seen floating in the front yard.

Part of the problem is the script doesn’t make sense. Told in a series of chapters that match days events things play out if it was much longer amounts of time. One character is found hanging and then what seems to be days later we see them at a funeral parlor. It’s only after the police report comes in that they realize its wrong. Didn’t they talk to the cops? Emotions come and go ad needed. Having just lost my dad the way the pair reacts about the death of one of their parents is completely not right. Had they been cold and uncaring maybe but their lack of reaction just seemed wrong. (of course the constant music may have washed it away)

Things just happen. There is often no rhyme or reason. Watching how scenes play out I was amazed at how things just happened because we need a scare here or we have to have this bit happen there. Characters come and go at random. There is sense of any connection to the real world only the movie’s needs. The first appearance of the home health aide or nurse seemed off. How other characters interacted just seemed wrong. I kept wanting to know about where the cops were when some of this was going down.

The thing is as much as all of this is bothering me- I didn’t notice it at first. I just went along. I was getting scared and didn’t want to watch. And then things slowed for a minute and I started to ponder, and then the death of the parent thing just broke it apart. I started to see holes everywhere. Yea the film was still scary but the edge was dulled because I started to see the machine creating the illusion.

Yes I like the film, and yes I recommend it, but I am slightly disappointed I didn’t absolutely love it.

There is a drinking game connected with this film certain to get you smashed- any time anyone asks “who’s out there” or “who’s there” take a drink. It seemed to happen in way too many scenes and it was making me laugh.
Posted by Steve Kopian at August 29, 2020