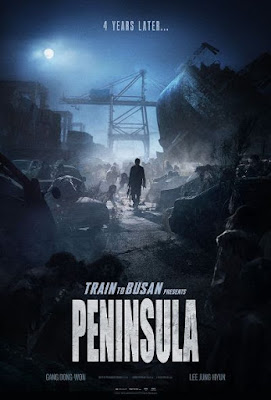 PENINSULA has a problem that only time will correct. Very much a sequel to TRAIN TO BUSAN which is itself a sequel to the director’s animated SEOUL STATION, the film is less a horror film than a tense action film. I suspect that many people going into the film are going to be disappointed with the film not being exactly precisely more of the same. I know that given time the film will find its audience and develop its own following, but initially there are going to be problems.

Beginning right after TRAIN the film follows a military man who is taking his sister’s family to safety on a boat out of the country. Things go horribly wrong and the boat to safety contains an infected person. The incident results in no more refugees being allowed into any other country. Four years later the zombie plague is contained in what was once South Korea. Our hero is offered a chance to make millions of dollars if he’ll go back into the quarantined country and get a truck full of cash. His bosses know where it is, he and his team of misfits just have to go and pick it up and bring it to the blockade running ship. Of course it all goes wrong and the zombies are in many ways the least of the teams problems.

And at this point I need to step outside of just writing this piece and say that while PENINSULA has problems (I’ll get to them in a minute) it is a very good film. While not a balls to the wall scarefest of the first two films it is a fine example of an action horror film. It is more a summer action film rather than claustrophobic horror film, or in John Carpenter terms this is more like ESCAPE FROM NEW YORK with zombies rather than THE THING. If you can go with the big action set pieces and the zombies kind of taking a back seat to human bad guys you are going to love this.

I like PENINSULA on it’s own terms but I am still having trouble getting my head around it not being the balls to the wall horror film. I love that the filmmakers chose to go in yet another direction, but at the same time I really need to get distance and see the film again in order to take it on its own terms (and I say this having seen it three times).

However despite the fact that the film is really good on it’s own terms there is no getting around that it has some problems that go beyond the problem of mixing genres.

First the film has an insistence of being in English for a good portion of it’s run time. I wouldn’t care except that many people don’t seem comfortable speaking the language. Outside of a couple of non-Koreans there really is no reason for it not to be all in Korean. More damaging is the fact that other than the mastermind for the caper, all of the non-Asians are really not good actors and their English performances are really bad.

The film also has real problem with over explaining what is going on. Much of the first 15 minutes is a cross cut sequence of the past with a “modern day” explanation of what happened in Korea. While it brings us up to speed it also over explains everything to the point it eliminates all the mystery of the previous films.

Lastly it's clear that most of the film was filmed on sets. While this allows for some great imagery and control of the action scenes. None of the sequences in the city feels like a real place. Where SEOUL STATION created its own animated reality and TRAIN was in our world, PENINSULA is wholly in the land of make believe. It's not a terrible thing, some of the set pieces couldn't have been done in a real world, but at the same time the sense of unreality keeps us a step or to outside of the film.

Of course I am nitpicking. PENINSULA on it's own terms is a crazy ass action film, which is enough. Actually its so good that were it not the third film in a sequence it would be the first film of a new series everyone would be talking about. I also think that on a second or third or more viewing I will warm to the film.