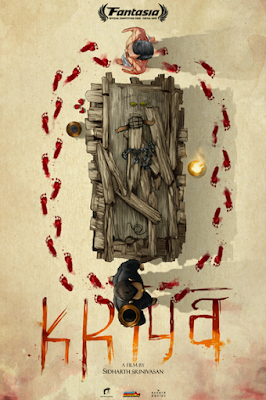 A DJ meets a beautiful girl in a club. She takes him him to her home where her dying father is shackled and gagged,. Then things get weird...

Strange horror film is less scary than troubling for all of the transgressive bits that are in it. I found I kept watching it more to find out how far into ugliness this film was going to go...and it goes pretty damn far, to the point that I am bothered and don't want to see it again because it bothered me so.

As good as the pieces are I don't know if the pacing of the film really works. Sequences, such as the the opening scene in a club seem to go on longer than need be. There is also a sense of form or point over plot line with writer/director Sidharth Srinivasan manipulating things for his own ends. It's never fatal but we shouldn't be feeling the directors hands.

While I like the film I don't love it, with my reaction being I admire it more than anything.

Still if you want an horror film that is decidedly not Hollywood, and at times deeply disturbing,  this film is for you
Posted by Steve Kopian at August 27, 2020