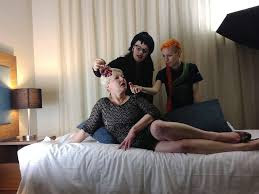 Morgana Muses was tied of her life. Her life was a falling apart and she decided to kill herself. Getting a fancy hotel room and an escort she was planning on going out on a high note... except that the encounter changed her life and makes a film about what happened. The result was that as she approached 50 Morgana became an adult film star.

Far from prurient portrait of a lovely woman who discovered the secret to her life is a small joy. This film is good time with a lovely lady. I kind of wish that the Covid crisis wasn't happening because I really would love to spend some time with her.

To be honest I don't know what else to say other than this is a sweet little film. I saw this film four weeks before the start of Fantasia and I have been struggling with what to say about it. I've watched it several times and each time all I could say was that was "sweet".

Recommended to anyone who want's to see a sweet little biography about a lovely woman and her movies.
Posted by Steve Kopian at August 20, 2020