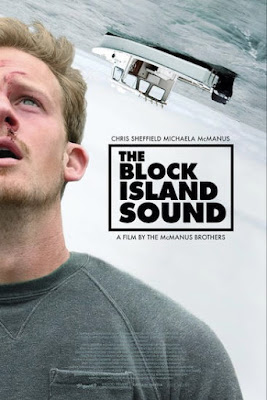 The title THE BLOCK ISLAND SOUND is very deliberate. It is what the film is about a sound in the waters off Block Island. As a result I want to make sure to say right at the start that when you see this film, and you should, make sure you have good headphones or good speakers since the soundscape is a big part of the film.

The film concerns the weird goings on in the waters off the island. A fisherman has returned from a night of fishing and is acting oddly. As his family tries to suss out what happened to him strange things being to happen around the island. Animals go missing, hundreds of dead fish are showing up on the beaches, birds are crashing into cars. What could be behind it.

Creepy ever building horror film is going to make you shiver with each twist and turn. This is a film that gets more and more out there with every turn. What exactly is going on, and will anyone survive? We can’t be certain.

And you’ll forgive me if I don’t say more. The film’s puzzle box design makes it hard to discuss past a certain point. While we don’t get all of the answers I don’t want to give you any clues as to where this is going because the fun is not knowing and trying to work it out yourself.

I really like the film a great deal. It’s been a long time since I’ve seen a film that managed to generate and sustain such as large amount of nasty unease.

THE BLOCK ISLAND SOUND world premiered at Fantasia and is worth a look
Posted by Steve Kopian at August 28, 2020