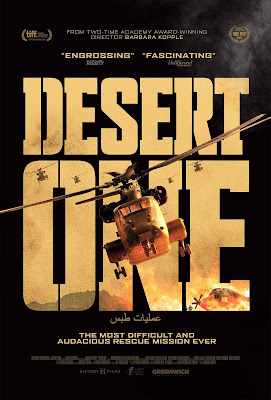 Barbara Kopple’s DESERT ONE is the story of what happened when forces were sent in to rescue the hostages during the Iranian Hostage crisis in 1980. Telling the whole story for the first time, it contains unreleased information and material for the first time, which is connected with interviews with many of the men and women who were there when it all went down.

Since this is a Barbara Kopple film there is no need to ask if it’s a good film, that’s a given. The real question is how good is it, and the answer to that is it’s really really good.

As someone who followed the events as they transpired and who has read several books on the subject in the past this film is eye opening. Watching the film I was on the edge of my seat, despite knowing how it all would ultimately transpire. More importantly watching the film it was like hearing the story for the first time. The edge of your seat feeling coe because of the way Kopple has woven in new material with old. As always her editing is perfect that the new material gives what we knew brand new colors.

I love this film a great deal. I loved it so much that I watched it two days straight and then dipped in a third time.

Highly recommended, it hits virtual theaters Friday. For a list of theaters go here)
Posted by Steve Kopian at August 19, 2020