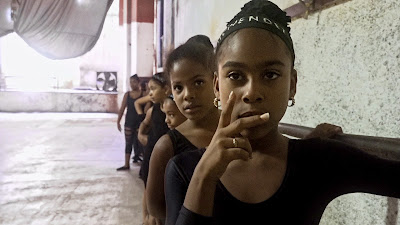 Hubert Sauper's EPICENTRO is a look at the history of Cuba since the bombing of the Maine, the use of cinema as propaganda, the people of Cuba (particularly the children) and the future of the island nation.

More a kind of free form essay mediation on the various subjects then straightforward narrative documentary EPICENTRO was a film that worked for me in moments more than as a whole. While nothing in the film is bad or out of place, I'm not certain that Sauper connects everything together emotionally. I kept waiting for an ah ha moment that never seemed to come. The result is a film that I really don't know how to describe or talk about.

In some ways not being able to talk about the film is good in that it forces me to say without reservation that you should see it and experience it for yourself, but at the same time I really can't tell you why. Yes it looks good. Yes it profiles some intriguing people. But beyond that I really can't explain why you should see the film, except, perhaps in that it does give you a real sense of the people and the physical place that is Cuba.

A one of a kind film EPICENTRO is worth a look.
Posted by Steve Kopian at August 27, 2020