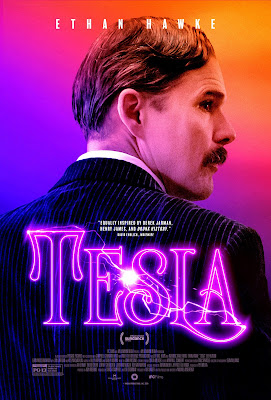 Ethan Hawke plays genius Nikola Tesla in a one of a kind biography that is mashes up styles to become like an Off Broadway play from the Public Theater turned into a one of a kind cinematic biographical art film. Its a film that does whatever it needs to do to make it's point with the result this is a film that will delight some and confuse just as many.

Unconventional and far from straight forward narratively, though right on target emotionally, Michael Almereyda's film feels very much akin to the trilogy of films from Hans-Jürgen Syberberg that portrayed Hitler, King Ludwig and Karl May. Those film bent the flow of time and used various cinematic techniques to get to the heart of the psyche of their protagonist. Here rear screen projection, colored lights, different lens and surreal imagery mix with out  of place flashes (Tesla sings Everybody Wants To Rule The World) to tell the story of Tesla's interaction with great men and the electrification of the world.  More or less since the film seems more intent on making us consider the man more than his achievements.

I am kind of in awe of he film and it's audacity. Few films of any sort really have this go for broke attitude. Even less truly trust their audience to go along with what it is doing without any sort of moments of dumbing down. This is for a film where you have to engage to keep up and for that alone I am delighted.

Truth be told few films these days truly delight me with their craft. Yes the story is engaging and it is entertaining, but I am beyond words with how this film simly does things because that is what has to happen at that moment. It' like Almereyda was following one of David Lynch's attitudes in making films and telling stories which is sometime these things simply have to happen and there is no need to explain it.

I don't know what to say but this is a one of a kind masterpiece that must be seen by anyone who doesn't want your typical Hollywood film. I'm not going to promise you will like the film but I will promise that you will come out knowing you've seen something.
Posted by Steve Kopian at August 18, 2020