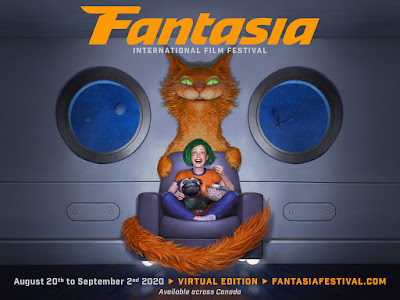 The always excellent Fantasia starts Thursday and runs until September 2. For those who don’t know Fantasia is the annual festival in Montreal specializing in horror, fantasy, science fiction, and off beat films from around the globe. They highlight so many great films that it’s kind of a shame that in most years people don’t get to really experience it….

….and then there is this year when the world had fallen into Covid lockdown. As a result the festival has gone, like all the others, virtual. What this means is that everyone all over the world can access some of the best mind expanding, funny and terrifying films produced across the globe. Frankly I am delighted that all the great films I’ve been watching over the last few weeks will get to be seen by a wider audience than just the people sitting in the theaters in Montreal.

The way the festival is working this year is that there are a number of On Demand films you can stream at any time. They are supplemented with a bunch of films which are getting “live” screenings, meaning that you have to look in at a specific time and specific date in order to see the film. You’ll have to check the website for details on which film is screening which way. The website will also have details on how to screen the films and the cost of each film.

As this posts we at Unseen are still working our way through the films that have been made available. Reviews for the On Demand films have already started posting (all our coverage as it posts can be found here) and the Live screening reviews will post within 24 hours of the film screening. As it looks now we should have coverage of at least 50 films (assuming we get everything that we've asked for)

Since Fantasia picks some of the best films from around the world over the last year we at Unseen has already reviewed a number of the films. Below is a list of the films we’ve covered at previous festivals. Click on the link to be taken to the review of each film.

Speaking of some will and some won't I saw TEXAS TRIP A CARNIVAL OF GHOSTS which is a film I have no opinion about. A free form look at decayed drive-ins, inde/underground music and the people who create. It's a interesting off kilter piece that I enjoyed in pieces but I'm not sure how to really write it up.  I mention it because this is a film where some of you may like it but be warned your mileage of course will vary.

Because all the films I've seen so far are good to great I've had to reduce the recommended list to the very tip top films. As such The Absolute Must See List is as follows:

CLAPBOARD JUNGLE- One of the best film on films ever made
THE OLD MAN MOVIE- Shaun the Sheep meets A Town Called Panic
MORTUARY COLLECTION- One of the best horror comedy anthologies ever
MONSTER SEAFOOD WAR - Giant monster seafood attack! A grand party film If you can do this socially distanced with friends you'll have a grand time.
TINY TIM KING FOR A DAY - Everything you never knew you wanted to know about the performer - and you do want it.

And that's it for this year. A bit low key for the usual Fantasia Curtain Raiser  but in the age of Covid it will have to do.

Now do yourself a favor and go to the website and start making plans to see a lot of movies
Posted by Steve Kopian at August 17, 2020

Email ThisBlogThis!Share to TwitterShare to FacebookShare to Pinterest
Labels: fantasia 2020