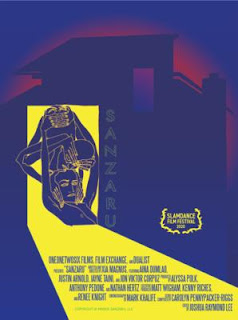 Evelyn, a nurse from the Philippines moves into take care of an elderly dementia patient. With her patient sliding away she begins to get a sense that something is not right in the house. As she tries to find out what is going on and what is the presence in the house, Evelyn discovers the dark history of her employer.

This mix of Southern Gothic and a ghost story by way the the Philippines results in a film that defies genre. The lack of clear cut genre works to the films advantage since it adds to the unease being created. What exactly are we watching? We can't be sure. Can we work out where this is going? Not really since the films rhythms are unique.

You will forgive me if I don't say a lot about SANZARU. It is not because I don't want to rather it is because this is a small film that deserves to be seen on its own merits. There are secrets and twists and turns here that I don't want to reveal because they will spoil the fun of the film.

Do yourself a favor and when you get a chance see SANZARU. It is a small gem that will entertain you better than many bigger films which is all you need to know.