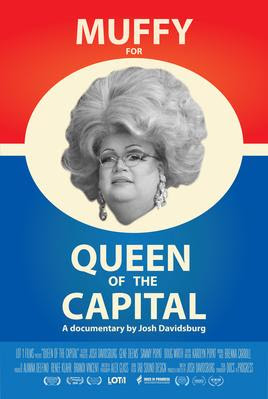 I have to say something right at the start QUEEN OF THE CAPITAL is a lovely film. It is the best sort of cinema - good times with great people. It made me smile for its entire running time and for days afterward.

I know that isn’t the way one should begin a serious review, but to hell with it, this is my site and I just loved this film to death and as soon as I was done I emailed the director to say I loved his film. (and yea I can do that because I am a film fan first and a writer second and I love when I can tell a filmmaker how much I love their work)

The film is the story of Daniel Hays who performs as Muffy Blake Stephyns in Washington DC. He is trying to become the Empress of Imperial Court of Washington, D.C. The organization is made up of LGBT people who get together to dress fancy and raise money for various charities. It is patterned on a royal court. The Empress is one of the co-chairs of the organization who reign for a year and over see the charity work.  Over the course of the film we meet Muffy‘s friends and watch as the organization raises money and spreads good cheer to all.

I really don't have a great deal to say other than -What an absolute joy this film is. Everyone in this film is an absolute delight. As I said at the top this is good time with great people, and everyone that is part of the organization are just great people, they are charming people doing good things for deserving organizations. I was so moved by the film that when it ended I went out and donated to local organizations helping out at risk youth. Any film that gets me off to give is something special.

I know this isn’t a deep meaningful review but it is heartfelt, which is what QUEEN OF THE CAPITAL is- and big hug and much love to some wonderful people and especially Muffy.