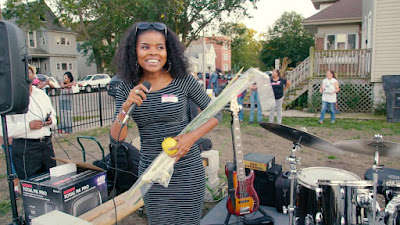 THEY AIN'T READY FOR ME is a small gem of a film. A portrait of Tamar Manasseh, an African American rabbinical student who is force to be reckoned with. One of the members of MASK- Mothers Against Senseless Killing- she and other members of the group take over a corner in Chicago where there have been several murders. The idea is that people will stop before they shoot someone’s mother.

This is a great little film. Manasseh is a pip and thus a great person to spend 90 minutes with. She is cock sure and she doesn’t take any sort of guff. What I love is she has real love and caring for everyone around her. Through her we get a great look at the community where she is sitting watch and as a result we are forced to ponder why the situation is so bad in the neighborhood and the whole city of Chicago.

More importantly the film is a dynamite look at a woman and her faith. Everything she does ties into her religion and her studies. Her life is a wonderfully an extension of what she believes. What I love is that director Brad Rothchild completely understands this and where many similar films stumble when it crosses the religious line THEY AIN'T READY… never does. It is all one organic whole and  it makes perfect sense in connection to what Manasseh believes.

This is an unexpected delight that is absolutely perfect.

A must see when it plays tomorrow at the New York Jewish Film Festival. For ticket and more information go here.
Posted by Steve Kopian at January 22, 2020