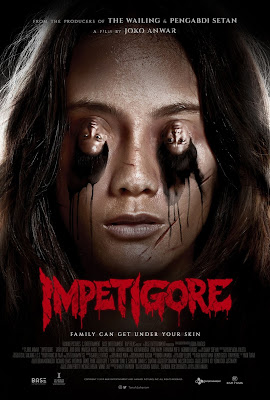 IMPETIGORE begins with a creepy, and in some ways funny sequence as a Maya, a young woman who works a toll taker complaining to a friend about a creepy man in a creepy car who keeps going by her. As they talk he comes by again- then he notices that he stopped just down the road and is walking back carrying a huge machete. She runs. He chases, saying he has to stop the curse her family left his village with. It is an attention grabber of the right sort and makes you want to follow the film wherever it goes. No long after Maya and her friend go back to her home, the village the man spoke of, in order to sell her family home. The locals are not at all happy.

A moody dark horror film IMPETIGORE is one of the best looking horror films in years. Once things get going almost every shot chills. Director Joko Anwar and cinematographer Ical Tanjung have crafted a place of absolute dread. We may not know what is going on for a good part of the film but where ever it is happening I sure as hell don’t want to go there. To put it plainly almost every shot could be in the running for best image in a horror film. More importantly they have pretty much dropped the idea of jump scares, they simply use the situations and the glorious images to create an unending sense of dread and fear that never really goes away. (try sleeping after this one) 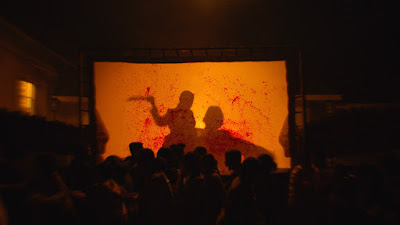 One of the really cool things about the film is that director Anwar has filled the film with little visual blips that set up the suspense. On a bus ride to the village there are a couple of times when there seem to be ghostly figures just standing in the distance. There are portents of evil off in the corners of shots. Anwar realizes that the right way to scare an audience is not to just be up front but to work subliminally or in ways that catch the corner of our eyes. Add it to some stunningly filmed horror sequences and you have a really good thriller that isn’t your run of the mill ghost fest.

One of the things that I like the film a great deal is that there is more than just a straight forward horror film going on. --- is meditating on the evils that we inherit from our leaders- think climate change or soul crushing debt. He also ponders what happens when that evil exists for so long that we take it on ourselves. It’s heady stuff that results in some unexpected turns.

After it’s record breaking run in Indonesia IMPETIGORE has just premiered at the Sundance film Festival. It is very recommended whether you see it in its remain screening there or on what will be it’s long run afterward. 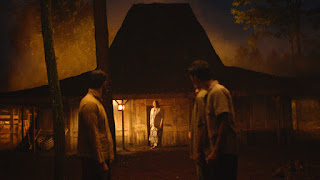