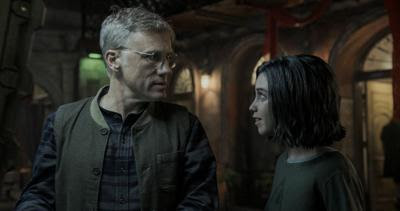 Brilliant doctor rebuilds a cyborg he found in  a junk yard and names it after his murdered daughter. As Alita rediscovers the world around her she begins to realize that she was a former soldier, and she also comes under the notice by the dark forces that run Iron City.

James Cameron produced and wrote this film, giving it to Robert Rodriguez to direct. I can't think of a better person to direct since Rodriguez's touch at mixing comedy and drama is always masterful.

Based on a classic manga story the film spins out mystery, action, romance and adventure in perfectly modulated waves. We are carried along as the story and world grows before our eyes, pulling us ever deeper into the mix. I love how the film keeps moving even in the quiet moments. There are no slack spots and by the end we realize we've had a full meal of a movie that leaves us both satisfied and wanting more.