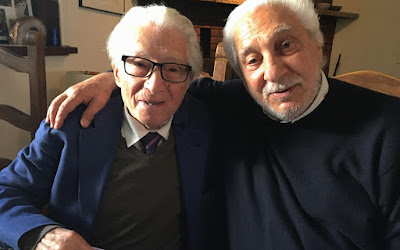 I don’t have a great deal to say about MENTORSnot because there isn’t much to say, rather it is because the film’s subjects can say it better than I could ever hope to.

The film is the story of the lives and friendship of photographers Tony Vaccaro and Santi Visalli who have been friends for over 60 years. Tony started out a war photographer and along the way he met up with Santi who became his close friend. We listen to the men talk about their lives, their photos and their relationships while looking at their photographs.

Utterly simple and totally enjoyable this film is the cinematic equivalent of hanging out with your grandfather and his friend and having them talk about their lives while they crack wise with each other. You alternate between laughing at what they are saying (their take down of Sophia Loren today is priceless) and being slack jawed at all the things that happened (answering the doorbell while dressed in a towel and finding a young and beautiful Sophia Loren standing there). I can almost guarantee you will be delighted by this wonderful film. (Hell as soon as I finished it I send off emails to friends and family saying they had to see it)

As much as I love director Andrew Davis’s slam bang action films, MENTORS may very well be his most enjoyable film. I know it’s early but it is already on my list of favorite films of 2020.