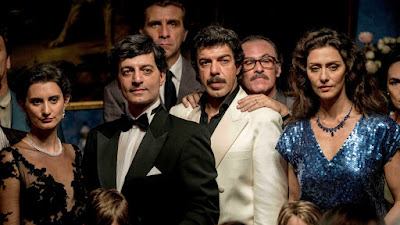 The first thing that pretty much everyone at the end of the New York Film Festival press screening for THE TRAITOR asked was, "what if THE IRISHMAN isn’t as good as this?" The comparison comes because the Martin Scorsese film is opening the NYFF and is a true life mafia movie like THE TRAITOR. Marco Bellocchio‘s two and a half hour biography of turncoat Tommaso Buscetta had the audience of jaded critics sitting bolt upright and unmoving. Everyone was engrossed to the point no one went to the bathroom. Everyone had to see how this all played out.

Buscetta was a member of the cosa nostra who left Italy and went to Brazil. He wanted to get away from the insanity of the early 1980’s when one mob boss was killing off not just other gangsters but their whole families in order to make sure he got all the money from the heroin trade. Buscetta thought he was safe but his sons who stayed behind were murdered and his efforts to be away but connected to the family resulted in his being arrested in Brazil and sent back to Italy. Wanting a bit of payback and realizing it was the only way to remain safe, he become an informant in one of the biggest criminal trials in history. He named names and put people away.

A glorious portrait of one man, this film is not an action filled crime film, but one filled with amazing characters who grab us and drag us along. While the film may not give everyone around Buscetta their due, we still get a sense of who they are. And because this is such a long decades spanning tale it’s understandable if things get left out. On the other hand this is not about anyone other than Buscetta and in the hands of Pierfrancesco Favino it is a well rounded portrait. While there are things we are never specifically told about our antihero, Favino makes sure we know via a gesture or a look. This truly is a full bodied performance worthy of an Oscar and every other award out there.

One thing I loved about the film was that while being a portrait of mobster this is not a film that glorifies the mob. Its clear that no one is a good guy. To be certain Buscetta is not a “good guy” but he is our focus, so we like him. However say what you will because he tells us of his crimes we always remember he too is a bad guy. I love that the film makes clear what the motivating factor is -pure greed. We also see the out right ugliness of what the mafia really is. This is not the section of GOODFELLAS where everyone turns on each other after the Lufthansa heist while popular songs play, this is worse. This is just cruelty as people are shot, hacked up or strangled because they are simply connected to a gangster. This is a compelling anti-crime film. We both are made to love and hate the life.

This is great filmmaking by a master filmmaker. I loved that several people after the screening were stunned that Bellocchio made the film. I loved that everyone loved that this masterpiece came out of nowhere to be one of their must sees of the festival and the year.

Hands down one of the very best films of the New York Film Festival and 2019.
Posted by Steve Kopian at January 27, 2020