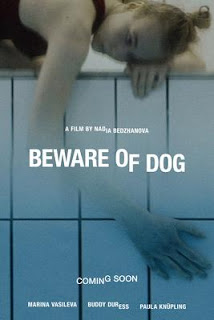 A woman in Moscow with OCD tries to find a way to have normal relationship. Her cousin in Berlin tries to start a relationship despite being bi-polar. Meanwhile in New York a boxer deals with addiction, anxiety and the feeling he is just no good.

When I started BEWARE OF DOG I was very confused, not because it was bad, rather because for a long while I thought it was a documentary. Never mind there is an early scene where an attempt at love making is interrupted by the need to fold towels, this was way to raw and real not to be a documentary.

All hail writer director Nadia Bedzhanova for she has made one of the best films at Slamdance.  While I can quibble about some of the storytelling, I can not quibble with the fact that she has made a narrative film that feels real. Watching sequences I stopped seeing actors but instead felt I was watching real life instead. I've seen some of the things that happen in the film. I have had conversations with people about what it's like to deal with depression, addiction and bipolar swings and this film seems to have it.

More importantly Bedzhanova has not only written a script that gets it right, and filmed it in differing styles that brings it all home, she has found a cast to sell it. Marina Vasileva, Buddy Duress) and Paula Knüpling sell their stories perfectly. They are not even remotely characters but they are actual people and we are watching them deal with their very real problem.

As I said above I could quibble about the story telling, particularly some choppiness in how we move from story to telling, it's a quibble, what is on screen is choice and needs to be seen by a wide audience.