Nate Hood on Richard Stanley's The Colour Out Of Space (2019) 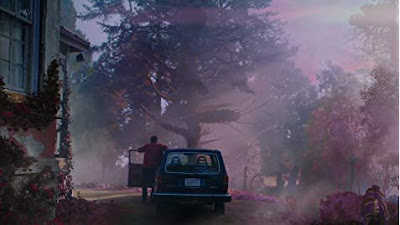 Even in the realm of H.P. Lovecraft stories which so often center on encounters with the unknowable and incomprehensible, his 1927 short story "The Colour Out of Space" has proven particularly difficult for adapters, centering as it does on a malevolent, quasi-sentient "colour" that falls outside the visual spectrum. Beyond this visual handicap, the story itself defies retrofitting into a traditional three-act structure—as with so many of Lovecraft's stories, "Colour" is set years after the actual action of the story and follows an unnamed narrator struggling to piece together just what in the hell happened. But Richard Stanley proved himself equal to the task with Color Out of Space, a film that might legitimately stand as the best Lovecraft film since In the Mouth of Madness (1994).

Dropping the past-tense investigative framework of the original story, Stanley tells the fate of the doomed Gardner family from their own rotating perspectives after a bizarre meteorite crashes into their farm located near—where else?—Arkham, Massachusetts and starts infecting their water, crops, livestock, neighbors, and finally, themselves. Given that the story provides sparse details about the central family, Stanley invents a brand new one more closely attuned to the modern nuclear family. He then proceeds to create the anti-Poltergeist: if Tobe Hooper's film was about the triumph of the modern family unit in the face of the unknown, then Stanley's is about its helplessness and destruction.

In an interview for Fantastic Fest, Stanley explained that he chose to adapt the story because it was one of his terminally ill mother's favorites and he'd read it to her while she died of cancer. Knowing this, it's difficult to watch Color and not see parallels between the Gardner's inability to save themselves from an insidious infection and somebody watching a loved one die of a terminal disease. Indeed, the eventual fate of the mother played by Joely Richardson can be seen as a Cronenbergian take on how cancer mutates, twists, and destroys the body.

This is an unrepentantly violent movie with some of the best gore and creature effects since The Thing (1982)—Stanley clearly brushed up on his John Carpenter before beginning production—that's complimented by eerily beautiful cinematography from concert film alum Steve Annis who uses deep, neon purples and pinks as stand-ins for the eponymous color. It’s a kaleidoscopic phantasm of loss and pain.