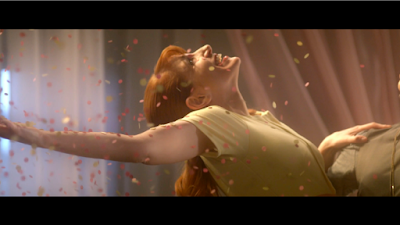 Over the last few months I reviewed a number of short films in Oscar contention in the hope that they would get on to the Oscar short list. MARRIAGE MATERIAL was one of them. This magnificent poisoned confection  dismantles the notion of  what all women should want and finds it hollow. It is a masterpiece that has grown in my opinion since I saw it and since I realized this was better than most of the short listed films. If you can see the collection of shorts at the New York Jewish Film Festival do so.

Musical short subject about a woman who goes to a place to teach her to become more marriageable after her current relationship implodes.

Bouyantly up beat music hides the fact that this is dark little confection that will break your heart. It’s a dark tale of selling your soul to fit in and the misery that results.

This was in the mix for a possible Oscar it is definitely good enough, the question was always would the committee making up the short list be able to get the taste of ashes out of their mouths.
Posted by Steve Kopian at January 19, 2020