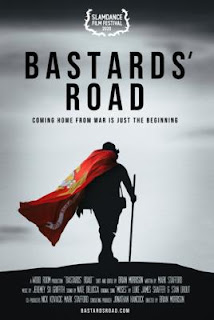 BASTARDS' ROAD follows Jon Hancock as he walks across America seeking to reconnect with the men he served with in 2/4 Marines in the hope of healing both himself and his friends of the trauma that they have suffered by the things that they experienced in the Middle East.

Before seeing BASTARDS' ROAD I was certain that the last thing we needed was another film about a vet walking across America to heal himself and others, but then I started the film and by the two minute mark as Hancock was talking while lighting a fire I was hooked. Not long after I realized that not only do we need this film, but that this is maybe one of the best films of 2020.

I am not going to do a great deal of talking about what happens in this film, not because I don’t have a great deal to say, but rather you need to meet Hancock and the 2/4 Marines for yourself. That the film works as well as it does is entirely due to Hancock and what he has to say and how he interacts with his fellow vets. He is not only a born storyteller but also a wonderful philosopher. He perfectly explains what he is feeling and why. He explains to us what happened and how it affected him and more importantly he draws out the people he encounters. Anyone spending time with him seems to open up and begins to heal. It’s a stunning achievement.

I am in true awe of this film. In all seriousness I started the film and I got about five minutes in and I had to stop the film and restart it because I thought the film had jumped to the middle. The film felt like I had been with Hancock for longer than just a couple of minutes. I was certain I couldn’t feel like I had known someone for a long time minutes after meeting him. I was wrong, I had instantly connected and the film was just getting going.

Whether you have an interest in Hancock and his journey or not you need to see this film. It is a film that will get under your skin and become part of you. More importantly it will alter the way you think.

The film just premiered at the Santa Barbra Film Festival (It plays again tomorrow) and it will play Slamdance on January 26 and 30th. (Information here)
Posted by Steve Kopian at January 19, 2020