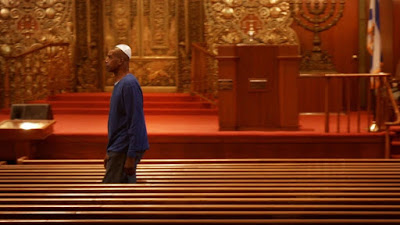 Opening Night Film of the New York Jewish Film Festival is biography of Aulcie Perry who was recruited by the New York Knicks in 1976. Cut before he could play a single game he ended up in Israel where he led the Maccabi Tel Aviv to the European championship the following year. Becoming a superstar things went sideways as drugs, prison and life altered his life.

Bring tissues because this story of a life and one man's efforts to find his estranged daughter will move you. Yes it hits on any number of things we've seen before but at the same time Aulcie's force of personality makes this something special.

And it is special. I was kind of ify at the start figuring this was going to hit all the typical moments and then suddenly I found I was hooked. I was charmed by the man at the center of the film and I was moved by the turns of his life (that final shot had me crying).

I don't know what to say other than this is a super film. Definitely worth your time- assuming you can wrestle one of the stand by tickets when the film opens the NYJFF on Thursday. For more information go here.
Posted by Steve Kopian at January 14, 2020