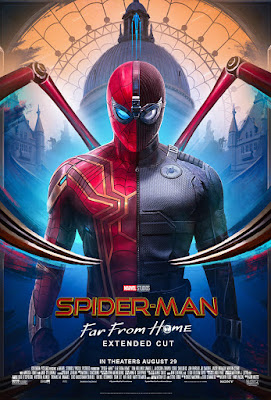 Returning after the events of AVENGERS ENDGAME Peter Parker and his friends have to redo the school year of the snap. Traveling to Europe on a school trip Parker is hunted down by Nick Fury who wants his help dealing with some elemental beings tearing up the continent. Fury is aided by "Mysterio" a man claiming to be a man from an alternate reality. The truth of the matter is that Mysterio is a bad guy with his on agenda.

Good adventure film deals gets ample mileage out of the wonderful interplay between the characters and wonderful action scenes. While the plot has serious problems owing to too many people knowing what Mysterio is doing and the fact that most of what he is doing is an illusion, it still is entertaining.