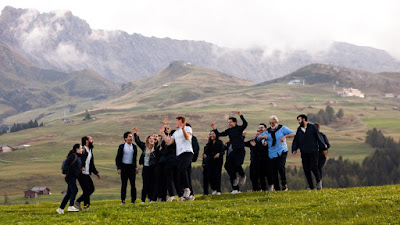 There is a reason I love the New York Jewish Film Festival and that is simply that every year I get to discover at least one film that get lives in my heart. This year that film is CRESCENDO

A German conductor is brought in to lead a student orchestra made up of Palestinians and Israelis. Dealing with the taught hatred, he has three weeks to mold the group into something special.

There is so much great that is in this film. First and foremost is the great cast which sells everything going on. Every one inhabits their roles making it more like watching real people rather than watching a story.As the conductor haunted by his parents evil Toni Erdmann’s Peter Simonischek is a revelation. As good as he was in the earlier film, he transcends this as a man who knows what he has to do and battles his own troubles to get his charges in shape. He is now one of my favorite actors.

The musical choices are spot on perfect. Yes. it's largely classical pieces we know but the choices are exactly right with the use of New World Symphony moving to tears in context.

While there is no doubt that the film  hits some expected patches, the wonderful characters, genuine emotion, music and witty dialog carry it along.

Highly recommended when it closes out the New York Jewish Film Festival January 28. For more information and tickets go here.
Posted by Steve Kopian at January 24, 2020