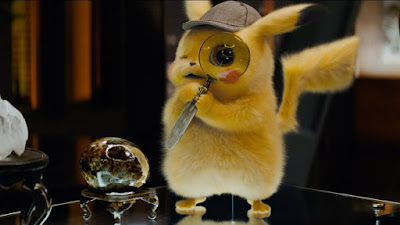 In a world full of pokemon a son tries to locate his missing father with the help of Pikachu, a Pokemon that is able to speak English.

Nifty little fantasy works because it is way more than just the game or anime series. There is a genuine mystery happening and it carries us along through events because we actually care about the characters. Blame the sterling cast headed by the voice of Ryan Reynolds who voices Pikachu and manages to make him more than a Deadpool knock off. The cast is so good that when the final fade happens I was actually wiping away a tear because we had a real character moment.

While not knowing who all the various pokemons may make the film a tad daunting since many are given little throw aways in the background, everything else in the film works, with the fights and visual effects looking spectacular.

An absolute delight..
Posted by Steve Kopian at January 11, 2020