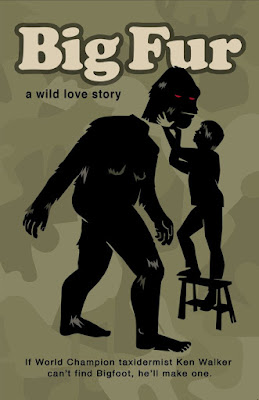 Big Fur is a portrait of taxidermist Ken Walker. One of the best in the world at stuffing animals, he has moved on from simply preserving dead animals, into recreating animals that no longer exist (sabretooth tiger) or may or may not exist (Bigfoot). It is Walker‘s drive to create a bigfoot based on the legendary Patterson film that is the focus of the film. As he puts the creature together we listen to stories about his exploits and art.

I am mixed on Big Fur. Going into the Slamdance this was my must see film. Yea, there were other films I wanted to see but this was the film I wanted to see. I have an interest in Bigfoot and I was curious about the idea of someone trying to make a life like model. I was delighted when the film started and I found that Walker wasn’t a nut job, but just a regular guy who happened to be very good at taxidermy. It was so nice that to see a film like this that wasn’t about crazy people. I really enjoyed my time with Walker and his friends and family.

The trouble is that as good as the film is this film is probably 20 or 25 minutes too long. There is a point somewhere just past the half way mark that the film begins to lose steam. Since there isn’t anything too crazy here the story of the bigfoot model peters out and yet the film goes on. I stopped paying full attention to the film. The film then shifts gears in the final minutes to get involved in a romantic entanglement that develops between Walker and a friend. While it is most certainly what happened during the period the film was made, it’s inclusion feels more like an effort to extend the running time rather than belonging in the story. My personal feeling is that if director removed say 20 or 25 minutes, mostly through a slight shortening of some sequences and removal of the end romance this would be a gangbuster hour long film…

…and despite my reservations it is worth a look when it plays a theater or festival near you.
Posted by Steve Kopian at January 24, 2020