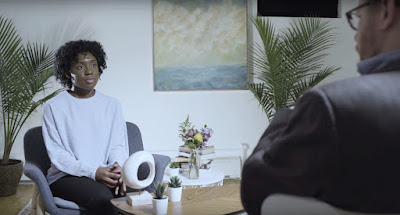 Powerhouse performances and a very shark scalpel make this take down of the media a must see short.

The film simply tells the tale of a young woman who has been invited to some on to a TV talk show and talk about rape, in particular her rape by a teacher when she was 12 years old. As she relates her tale she quickly realizes that no one really cares. This leads to an explosion…

This film is a stunner. A straight on point take down of talk shows and news programs this film doesn’t have a false note in it. This is all the work of writer director and actress Ewurakua Dawson-Amoah who essentially dismantles on screen. It is a stunning portrait of a wounded woman lashing out and it will break your heart because you feel all the pain and rage. It is so good that it will make your Best of the Year list because frankly it really is a towering achievement- more so when you consider she stepped in at the last minute when the actress who was supposed to do it didn't show up. (She needs to do more acting)

But it’s not just her performance that is top shelf but her writing and direction. The script is spot on. And her direction is as good as it gets. Yes I know it is a simple set up with the camera just pointed at two chairs, but that’s a dodge and a misdirection because Dawson-Amoah may not move the camera but she sure as hell moves everything on screen, from the people dressing the set, to Tim Cox’s smarmy interviewer (he’s so good you may hate him forever) to Dawson-Amoah herself. She has choreographed a dance that moves the soul of the audience. It deserves as many awards as it can muster.

This is a masterpiece and a must see.
Posted by Steve Kopian at January 10, 2020